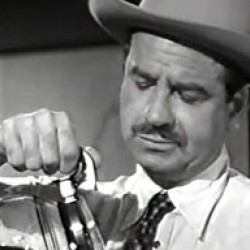 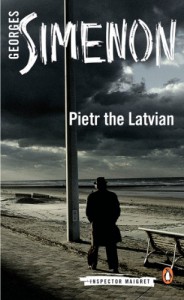 I don't really know what to rate this--all I know is that I read it in a rush, all in one morning (felt like one breath!)--and suddenly I was done...and I knew that I had enjoyed it. It rockets. It's sleek. it's not very long, perhaps to the detriment of what could be more emotional impact.

But it looks like all the Maigret books are rather short; you could, for instance, place one on the fur of a cat in repose, and not even disturb the dreaming feline. If this were a particularly furry cat, you may not even displace or compress the bushiness of the beautiful, sleek coat--sleek, like the book.

A lot happened in the 162 pages I experienced with coffee this morning. From one point of view, this is a very exciting and surprisingly suspenseful debut for a future "Great Detective". Maigret in danger, clearly, as he pokes at a dead body in the cramped toilet of a train that has come to Paris; well, if not then, certainly not long after. The fact that someone is soon gunning for Maigret once it's clear his case may connect to international, organized crime, suggest that the solution may be a cold one: "business is business; no one talks; we settle things amongst ourselves; even that cop has to go.". That's not actual dialogue from the book, but it does come to feel like someone is plugging holes, by plugging people and making holes...

So, is there a "human factor"? Or is just business? Some sort of business gone wrong? Seem to be a lot of players, tied to the life, and seeming death, of a tough-to-catch criminal schemer named Pietr the Latvian, who has operated in several European arenas. Is that actually him, lying in the toilet? Is there more than one Pietr? And who are all these women who keep cropping up, once the fellow last seen near the dead possible-Pietr the Latvian is followed by Maigret, who notices that that fellow looks very much like a live-Pietr the Latvian. It becomes a web, and Maigret, with some helpers, runs the web, runs all the strands.

This is not really a "the clues make the Mystery" approach; Maigret surveils, he follows, he digests any info he can get from police and intelligence agencies, on Pietr, and anyone the faux Pietr--unless it is Pietr--comes into contact with, including respectable-looking millionaires and their wives. Fairly late along, a tragedy occurs that fills Maigret with guilt and anger, and at least by this time, it's what they call personal. Plus, when the truth is run to ground, and a man cornered out on the treacherous rocks under the stilts of a jetty extending out to rough waters, it's personal again. Not just "rub-outs" and "taking care of business". I re-read a few key scenes from earlier, just to clarify some of the complexities, regretted that my opinion of the book was slightly sullied by the fact that puzzle relies a bit on what has become an oft-used trope of Mystery and Thriller fiction that could use a rest, and talked myself out of a 4 star rating.

Maybe it is a 4 star book. I mean, it's a very vibrant debut for a detective who grows on a reader (okay--this reader) by the end of this first outing. He must have made a strong first impression when he originally burst on the scene; he has, again, all these years later with me. But I'm going to leave Room for Improvement. I've had My Friend Maigret thrust at me as one of the truly great novels in this long-lasting series. I almost wish the books were longer, because if anything I feel short-changed on, it's not getting a powerful look at the mindset of the person or persons doing the killing; passion and jealousy and desire gone wrong are dealt with in 162 pages of complex Murder Mystery--they can be spotted--and I did feel pangs for certain characters by the finale. But it's all so quick.

I may change my rating...and not just if all the Buddy Readers weigh in with 4 or 5 stars. It certainly made me want to read it all in one go. A lively, intricate story, always on the move.